Arena is a programming game created by Richard Brown and released as shareware for DOS in 1985. The aim of the game is to design and program a team of up to six robots which attempt to eliminate the opponent's team in a battle arena.

Robots have 10 design points which can be allocated to the CPU, weapons and armour. Programs are written in CASM (Cyborg Assembly Language), maximum program length = 8 × CPU design points. There are 26 registers :A–:Z. The following commands and control registers are supported:

Robots battle in a 68×20 arena. A robot is damaged every time it's attacked or collides with something and destroyed when :H (damaged sustained) reaches :M (maximum damage).

The complete specification is available in the Arena manual.

The Arena manual includes a detailed description of CASM. See also the errata and instructions for the editor and lister.

The Arena Programmer's Hint Sheet contains a summary of the opcodes and registers.

Arena was published as shareware for the PC, priced $10–$30. Registered users received a colour version, the Electric Gladiator newsletter and source code in Turbo Pascal. Versions were also announced for the Apple II, CP/M and Amiga. 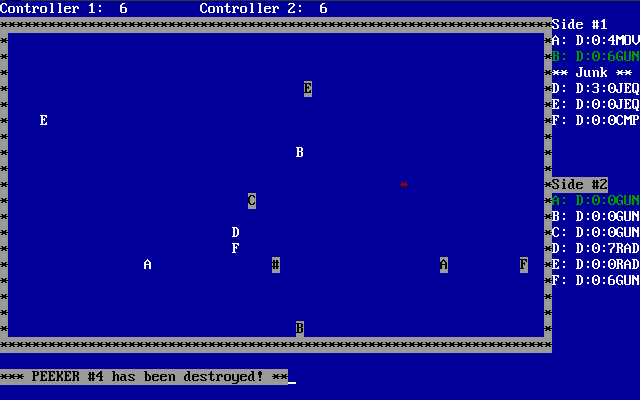