CoreLife is a programming game inspired by Core War and published as shareware for the PC by Brent Adams in 1993. CoreLife is played on a 100×100 grid by programs written in a two-dimensional programming language. The aim of the game is to write a program to eliminate all opponents.

Programs are written in a two-dimensional assembly-like language. Each instruction has one or two arguments and direction flags to indicate the flow of control. Arguments include X and Y coordinates and an addressing mode. Labels are up to 8 characters terminated by a colon. The following commands are supported:

Programs are loaded into the 100×100 memory grid of a simulated two-dimensional parallel processing computer. A program's strength is calculated by (space occupied) / (number of processes) and any conflict for a memory location is resolved randomly based on the relative strength of the programs.

The complete specification is available in the CoreLife manual. There's also a short tutorial written by Jesse Chang — CoreLife Addressing Examples and a Quick Start Guide.

The following battle programs are available: 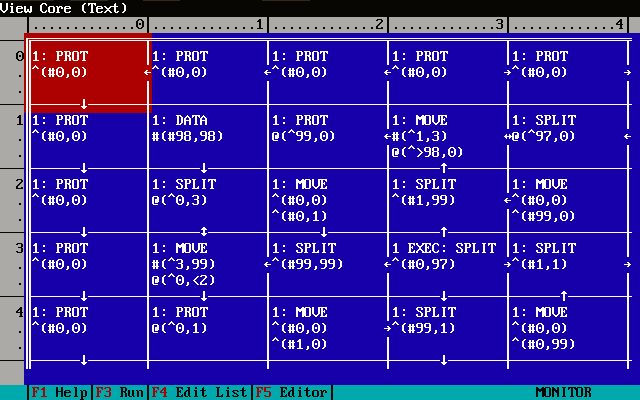 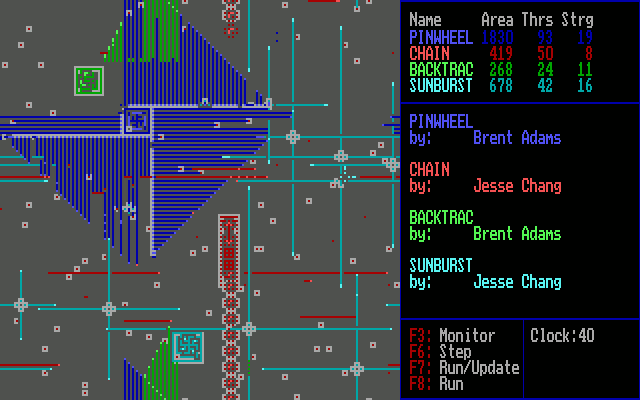