DROID is a programming game written by Robert Yazhari, Joshua Kors and Craig Fransen at Reichhold Chemicals in 1984. The aim of the game is to write a program to control the the movement, radar, gun and radio of a battle robot. Up to seven robots are placed in an arena with the survivor being declared winner.

D-code is a stack based programming language that provides instructions to manipulate the stack, perform simple maths and transfer control. DROID has 24 general purpose user registers and 10 system registers:

Robots battle in a 6300×3400 arena. A robot is damaged every time it's attacked or collides with something and destroyed when DAMAGE reaches zero.

The complete specification is available in the DROID manual.

DROID is written in SPL for the HP 3000 series of minicomputers and was distributed on the 1985 Interex CSL tape: 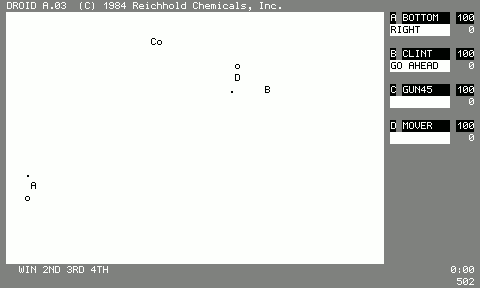